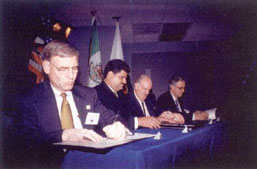 San Diego, CA - May 19, 1999 -  The Corporación Universitaria para el Desarrollo de Internet (CUDI) and the University Corporation for Advanced Internet Development (UCAID), the US organization leading the Internet2 project, today signed an agreement to collaborate on the development of advanced Internet technologies and applications for research and education. Mexican President Ernesto Zedillo and California Governor Gray Davis were present as CUDI became the first Latin American research and education networking association to sign such an agreement with UCAID.

"With this agreement, researchers in Mexican universities will have the opportunity to collaborate with researchers working on advanced projects in North American universities. This will permit research in México to come into contact with state of the art technology in the fields of advanced telecommunications networks and next generation Internet development." said Carlos Casasús, General Director of CUDI.

"This agreement establishes a firm foundation for collaboration between our national organizations, as well as among our member institutions." said Douglas Van Houweling, President and CEO of UCAID. "We look forward to working together on the revolutionary applications and technologies that will transform the global Internet of tomorrow."

As part of today’s announcement, CUDI and UCAID agree to:

rovide appropriate interconnection between Internet2 and CUDI members for the purpose of development and pre-commercial testing and use of advanced research and education applications;

collaborate on the development of common standards and technical implementations across their respective networks;

romote collaboration between their constituent member organizations and institutions relating to the development of next-generation networking and applications in research and higher education; and

encourage technology transfer from their joint endeavors to accelerate the availability of new services and applications.

As part of the same event at which the national CUDI and UCAID organizations signed a MoU, the Corporation for Education Network Initiatives in California (CENIC) signed a separate agreement with CUDI to collaborate on networking development. CENIC is an active participant in the national Internet2 project and is developing advanced networking capabilities among California institutions. Additional complementary efforts are underway between CUDI and Internet2 universities in Texas.

Internet2, a project of UCAID, is a collaborative effort by over 150 US research universities working in partnership with industry leaders and U.S. federal agencies to develop a new family of advanced Internet applications and technologies to meet emerging academic requirements in research, teaching and learning. Internet2 is addressing this challenge by creating a leading edge network capability, enabling a new generation of applications, and working with industry and international partners to transfer new technologies into the global Internet.

The Corporacion Universitaria para el Desarrollo de Internet (CUDI) is a not-for-profit corporation incorporated under the laws of México with members from the public and private sectors. Its purpose is to support and facilitate the development of high capacity telecommunication and computing networks that promote research and development, as well as educational activities in México.